The first time there was a Prime Minister was in 1959 and it was chosen by the Governor of Singapore and later the Yang di-Pertuan Negara (head of state), when Singapore could have the power to govern as the State of Singapore inside the British Empire. The title of Prime Minister did not change after Singapore merged with the Federation of Malaya, Sarawak and British North Borneo, while Singapore was a state in the Malaysia from 1963 to 1965, and after independence in 1965. 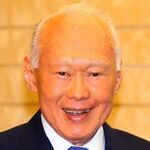 Lee Kuan Yew (born 16 September 1923; also Lee Kwan-Yew) is a Singaporean politician. He was the first Prime Minister of the Republic of Singapore from 1959 to 1990.

He was the co-founder and first secretary-general of the People's Action Party (PAP), and led the party to a landslide victory in 1959. During his leadership, Singapore separated from the Federation of Malaysia in 1965 and grew from an underdeveloped colonial outpost with no natural resources into a Asian Tiger. He has remained one of the most influential political figures in South-East Asia. 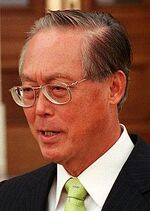 Goh Chok Tong (born 20 May 1941) was the second Prime Minister of the Singapore. A member of the People's Action Party (PAP), he became Prime Minister on 28 November 1990, succeeding Lee Kuan Yew, and served in the role until 12 August 2004, when he stepped down and was succeeded by Lee Hsien Loong. 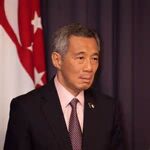 In August 2004, Goh Chok Tong stepped down as Prime Minister, while Lee Hsien Loong took over the position. He then became the General Secretary of People's Action Party (PAP).

Community content is available under CC-BY-SA unless otherwise noted.
Advertisement